Introduction:
Drought events in the Mediterranean region have been documented with increasing regularity over the past two decades. Livestock grazing is widespread in the extensive coniferous forests of Israel, both as a husbandry practice and as an important tool for reducing understory biomass and subsequently the risk of wildfires. It is believed that grazing plays a role in alleviating drought stress in trees by eliminating understory competition for limited water resources. However, despite its prevalence as a management tool, little is known about the effect of grazing on the physiological status of pine trees.

The aim of this project is to research the effect of livestock grazing (cattle, goats and sheep) on tree growth, and water and nutrient relations, to determine the relationship between grazing and planting density, and to observe the effect of grazing on natural forest regeneration in semi-arid coniferous forests. The study is set up at three different sites (Yatir, Sataf, and Mt. Horshan), over a range of growing conditions and accompanying vegetation types typical of the Eastern Mediterranean. All three sites contain plots fenced off to prevent grazing, adjacent to control plots that are subject to seasonal grazing of various types, over a range of different stand densities.

This research will help determine the effects of livestock grazing on the physiological function of pine trees under a variety of growth conditions common to this part of the world. Additionally, it will contribute to understanding the relationship between grazing, forest thinning practices, and forest regeneration. These results will play a role in developing new integrated forest management strategies and help ascertain whether livestock grazing can be effectively utilized to mitigate water shortage and ensure survival of forests in semi-arid areas threatened by future climate change.

Oaks (Quercus calliprinos) woodlands growing in marginal water limited habitats of Israel are under serious threat of oak decline induced by climate change. Livestock grazing is one of the few tools available for effective, large-scale vegetation management in drylands, but our understanding of the impact of grazing on the water relations, growth and survival of trees under drought is very limited.

The overarching objective of this project is to assess the impact of grazing on water relations and performance of oak trees as keystone species in the climate-vulnerable transition zone of Israel. This project also aims to assess oak populations growing in marginal, water-limited habitats to develop a set of environmental and biological indicators of their vulnerability to drought. In this project an eco-hydrological model which describes woodland structure, and oak performance and survival along aridity and grazing gradients will be developed.

Leaf senescence is a central, well-coordinated process in the life of plants and comprises the first stage of leaf litter decomposition that ultimately recycles carbon and nutrients. Microorganisms are known to participate in leaf litter decomposition, but little is known on the role of microbiota in leaf senescence and the initiation of decay immediately following tissue death. In this work, we aim to study the involvement of leaf microbiota in senescence and early breakdown of cell components in leaves by combining microbial, chemical and ecological approaches, using microscopic and chemical tools at various scales. We will study sorghum (Sorghum bicolor) – a staple food for millions of people and fodder for farm animals across the world. Importantly, the selection of grass as a model plant will allow us analyzing mature, senescing, dead and decomposing tissue along a developmental axis on the same leaf and under identical conditions. Specifically, we will correlate microscale mapping of leaf topography, chemical composition and water content, with the microscale microbial organization on the leaf and with isotopic composition of CO2 emission, over time and across space along the axis of the senescing and decaying sorghum leaf. This study has the potential to reveal novel interactions between microbiota, plant developmental processes, and ecologically significant mechanisms. It will shed light on the dynamics of bacterial organization and may reveal new roles that plant microbiota plays in leaf senescence and early decay, which are key processes in the carbon and nutrient cycles in natural and agricultural systems.

Litter degradation is a key process in the carbon cycle. To date, there is a lack of understanding of the mechanisms underlying decomposition of organic matter in arid and semi-arid zones. There are a few factors involved in this process that drive various decay mechanisms, as follows: (1) Litter quality or traits (nutrients and their ratio, structural components, morphological traits, and more), (2) humidity and water, driving microbial degradation, (3) UV and short-wave visible radiation (280-550 nm) driving photochemical degradation, (4) high temperature, driving thermal degradation. Notably, these decay mechanisms frequently interact and additional factors can come into play, such as litter position.

This research will analyze the profile of changes in litter traits and CO2 fluxes induced by single and combined decay mechanisms. Furthermore, the project will quantify in an extended field study the decay-derived CO2 flux and turnover time of ‘dead’ carbon at the ecosystem scale.

The overarching goal of this research is to determine the climatic impacts on the CO2 flux derived from decomposition of organic materials in dryland ecosystems and to assess the contribution of the various decay mechanisms on the CO2 flux.

Information on climate effects will enable improved projections of the decay-derived CO2 flux in drylands under a changed climate. Changes in litter functional traits during decomposition as affected by climate and litter type will shed new light on the functioning of the decay mechanisms. Information on the relative contributions of the decay mechanisms will further enhance our understanding of the control over decomposition and the concomitant CO2 emissions from drylands.

In many drylands, key invasive plant species belong to the genus Prosopis spp. (mesquite) known to have a negative impact on native biodiversity and on water availability to native trees and shrubs with shallower root system. Moreover, mesquite has a potential to increase soil erosion rates due to modified root structure, and more nitrogen supplied to the newly colonized ecosystems may significantly impair water quality.

In Israel, exotic Prosopis species are widely used as ornamental plants and have been purposely planted in arid and semi-arid regions since the 1960s.  A recent survey reported that multiple planted populations of Prosopis became invasive and currently invade 690 km2 of the Dead Sea area, Negev desert, Jordan Valley and the Arava Valley.

Despite the increasing presence and very high risk of invasiveness, the impact of Prosopis encroachment on ecosystems and the environmental conditions prone to invasions in Israel are currently unknown, although consequences for plant communities and function of ecosystems were anticipated. There is a major knowledge gap in our understanding of the environmental factors conducive to invasion by exotic Prosopis species in Israel and the ecosystem consequences of such invasion events.

The objectives of the project are as follows:

a) To understand the edaphic, hydrologic, geophysical and climatic conditions conductive to the invasion by Prosopis spp.

b) To assess ecophysiological performance and traits related to successful Prosopis invasions by comparing the performance of Prosopis individuals to native Acacia trees.

c) To evaluate the ecosystem-scale changes imposed by Prosopis invasion on the carbon and nitrogen cycles, and the composition of plant communities;

d) To develop practical guidelines for the effective prevention of further invasion by Prosopis spp. around the Dead Sea.

Ilya Gelfand, French Associates Institute for Agriculture and Biotechnology of Drylands, The Jacob Blaustein Institutes for Desert Research, Ben-Gurion University of the Negev

Semiarid regions occupy about 16% of the global land area and are prevalent both in China and Israel. Because of their large area, and despite severe water limitations, semiarid regions are of high importance to the global carbon balance, partly because they enable tree production and relatively high rates of carbon sequestration at the world’s dry margin of forest distribution. There are major knowledge gaps in the way of soil water regulation of the carbon cycle, mainly because of the frequent temporal mismatch of ecohydrological and biogeochemical processes, and because of the lack of ability to generalize across semiarid zones differing in climate seasonality. The overarching objective of this project is to assess the relationship between seasonally fluctuating water stores and carbon fluxes in semiarid forests characterized by either summer or winter rains. This study will make use of the contrasting climatic seasonality of the semiarid regions of China (cold and dry winter; mainly summer rains) and Israel (mild and moist winter; hot and rainless summer), providing an ideal setup for comparative studies on soil buffers of water supply for carbon sequestration in dry forests.This study will provide insights into the intricate relationships between precipitation, soil water, and ecosystem water and carbon fluxes, including legacy effects of soil drought vs. available soil water on water usage of forests and the consequences for carbon sequestration. 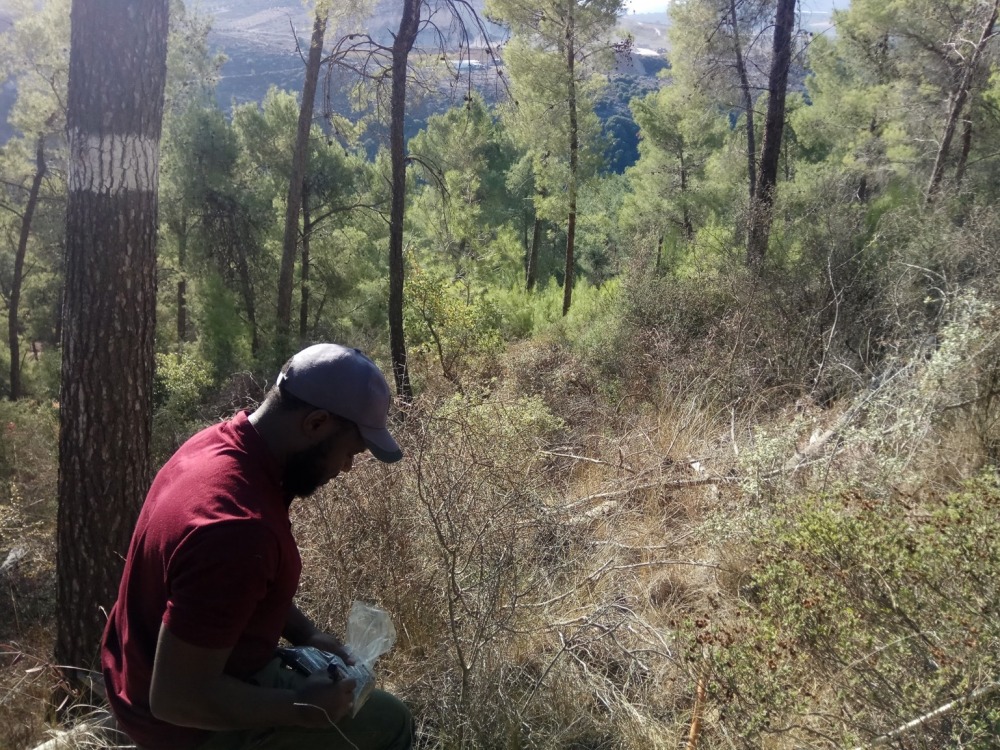 Trees are a vital part of the urban landscape and are an essential factor for the well-being of people. Trees, and mainly their root system, in urban environments are frequently subject to intense conflicts with infrastructure, such as buildings, roads and utility installations. Because of the inaccessibility of the root system we have only a limited understanding of root activity and their interaction with the tree canopy in an urban setting The overarching objectives of this project are to quantitatively assess the state of the root system of mature urban trees, to link it to the functioning of the tree canopy, and to test management options targeted at improving conditions of the root system and the entire tree. The study will provide insights into tree management using practices to improve root function and tree survival.